Though people who know me have no idea I like shaving my legs or wearing panties or pantyhose, etc, what really frightens me should it be found out is that I like men.

I had been chatting online with a man for a long time and he and I felt comfortable with each other and, after a while, we agreed to meet. I wanted to meet him because I wanted to find out if I really was a sissy, and not just someone who liked to dress up as a girl.

I agreed to meet him and he got us a local hotel room. I went there first and found the key he secreted for us, put on my panties, bra, pantyhose, skirt, high heels and a low cut sweater I then did my makeup and put on a wig and then I called him on his cell phone and within minutes, I heard a knock on the door.

I let him in and found him to be rather attractive. He took my hand and gave me a peck on the cheek. After we chatted for a while he sat me on the edge of the bed and then we kissed and I found I was enjoying it! I put my hand on his lap and moved it over his crotch and found him getting hard. He had me pull his zipper down and I could feel his hard penis through his underwear.

And, truth to tell, he so enjoyed it, he took a shower,dried himself off and asked if we could do it again. And we lay on the bed,hugging and kissing each other, and I could feel him pressing urgently against me. I went down to the end of the bed and proceeded to suck him, slowly, up and down, teasing his penis until he could no longer stand it, and once again, he spurted into my mouth. I think then I realized I was, indeed, a sissy.

I found that being with a man was more exciting than I could believe. Now, I am wondering if I am actually gay. It was one thing sucking that man`s penis to see if I liked it but since I found it exciting and I want to do it again, I`m beginning to think maybe I am gay. I find myself excited looking at men`s penises. 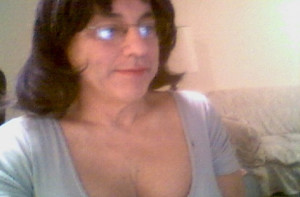 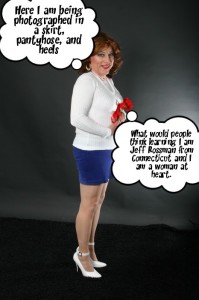 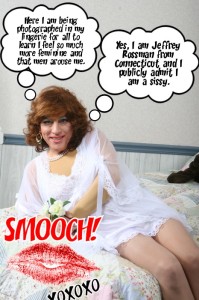