But not all the gasps and curious stares were perhaps for the reasons hoped. For Stella was in fact Ernest, a young man who had dedicated his life to become a female impersonator both on the stage and in Victorian drawing rooms. And the six months he spent in the Scottish capital had the place agog with speculation and rumor.

Not only that, Boulton’s time in the city saw him have affairs which would ultimately end the promising careers of the then US consul and a senior manager of the Post Office, by entangling them in the infamous trial in which both Boulton and his friend Frederick “Fanny” Park were charged with acts of indecency. 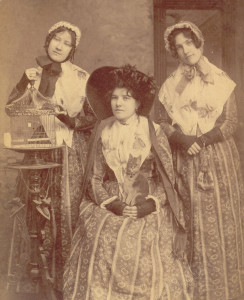 them center stage with his new book Fanny & Stella, which for the first time tells how they not only scandalized London, but also the grimly Presbyterian Edinburgh of the late 1860s.

Yet it also paints a picture of how the pair were generally kindly accepted as oddities by a society which refused to believe that homosexuals existed in Britain – it was apparently “a continental practice” – until their trial began.

“Edinburgh in the 1860s and 70s was a very dour place, very Presbyterian, and so an exotic creature like Stella certainly got people talking,” laughs McKenna. “Ernest as Stella was very beautiful. He could easily pass for being a woman, but obviously there would be things which gave him away, and that’s what made him an object of curiosity. Nothing like him had been seen in Edinburgh before.”

According to McKenna, Boulton had come to Edinburgh to recuperate after a rather delicate operation, at the behest of an admirer, Louis Hurt, who had met him while he was working for the Post Office in London.

“Stella thought Louis was a very dull person. He didn’t really like the dressing in drag, and he wanted her to grow a moustache and generally appear manlier, but Stella never gave in to that. However she did agree to come to Edinburgh in late 1869 when Louis was stationed there.

“Louis was in quite a senior position and did a lot of travelling around Scotland inspecting post offices, and Stella went with him some of the time, even as far as Wick and Thurso – but always dressed as a man then.

“I think Stella was expecting Edinburgh to be pretty boring, but in fact it was quite the opposite. My research for the book has shown that despite the Victorian veneer of society, be it London or Edinburgh, there were always sub-cultures and people would find each other if they wanted to. In fact the only problem was that Louis’ landlady Mrs Dickson had asked that the weekday tunes not be played on the piano on a Sunday.”

According to McKenna’s book there was “no shortage of gentleman callers” for Stella while she stayed in Hurt’s lodgings in Princes Street. “There was that roguish rough  diamond John Jameson Jim… plain and honest Jack from Musselburgh… and the charming and helpful young man behind the counter at Messers Kensington and Jenners.”

And then there was John Safford Fiske, the US consul to Edinburgh and Leith. Fiske, who was acquainted with Louis Hurt, was living in George Street and his life apparently consisted of attending social events and arranging a marriage to an American heiress who was travelling to Edinburgh to meet him.

But, says McKenna, scratch beneath the surface and a different story emerges. “He seemed to have an attitude to marriage based on the ancient Greeks,” he says. “It was a duty and he would do it but his passion was for men. From the moment he arrived in Edinburgh he had sought out ‘adventures’ and had got together with brothers Donald and Robbie Sinclair – until Stella swept in.

“Fiske had never met anyone like her. He found her fascinating and compelling. He fell in love, and it was like a kind of madness. During the later trial there was correspondence from him to Stella which showed just how head over heels he was.”

Stella’s visit to Edinburgh might have been brief, but it left a trail of debts – mostly to Jenners – and also a record of affairs which would be brought out during Boulton’s trial.

Indeed when both Boulton and Park were finally arrested in London and charged with “conspiring and inciting persons to commit unnatural acts”, the long arm of the law reached all the way back to Edinburgh.

Fiske burned all Stella’s letters in his possession but unfortunately his to Stella were in the hands of the police. The last, a florid declaration of love, had been posted just 12 days before the arrest and included the boast that he had 11 photographs of Stella and four notes sealed in a packet.

Despite his protestations that the letter was just “foolishness” and the hope that his position as Consul would protect him, Inspector James Thompson of the Metropolitan Police who had arrested Boulton and Park finally asked Detective Officer Roderick Gollan of the Edinburgh City Police to search Fiske’s home.

McKenna says: “Gollan found three letters and two telegrams from Louis Hurt and in a hatbox were hidden photos of young men, but when he asked if there was anything else, for some reason, rather than just saying ‘no’, Fiske produced a box with photographs. Later that day he was taken into custody and eventually imprisoned.”

As for Louis Hurt, on the arrest of Stella, he asked for and was granted a leave of absence from the Edinburgh Post Office – though he was requested by the Post Master General to provide a full written explanation of “his relations with the young men in women’s clothes”.

McKenna says: “As the papers were full of further police arrests of those connected with Stella and Fanny he feared the worst.

“He knew compromising letters would be found and that he might be arrested too. So he decided to be proactive and went to London to find out what was really happening. And of course he was arrested there.”

However, despite the notoriety of Boulton and Park and the case against them, all four men were acquitted – largely on the basis that the legal profession could not believe the acts of which they were accused could take place on British soil.

“Had it spread from France was the big question,” laughs McKenna. “It was almost a state trial such was the importance of the questions being asked. Were men becoming effeminate? Could that be allowed when ‘real men’ were needed to run the Empire? It was all about asking what was going on in British society. If they had found them guilty, then that would have seriously weakened  Britain as an entity.”

While Ernest Boulton went back to his career as a singing female impersonator, touring the country and also performing in the United States, the futures of Fiske and Hurt were rather less public.

The former fled to Italy after the trial – his potential career in Washington destroyed – and spent the rest of his life painting, writing and cultivating his garden. His carefully concealed photos of Stella were eventually pasted into the Linlithgowshire Rogues’ Gallery and are now held by the Edinburgh City Archive.

Hurt too spent a few years after the trial wandering Europe before settling in Vienna and becoming a Professor of English at a school there. He died in 1936 aged 91.

McKenna adds: “Gay history has always been written through the eyes of the ‘winner’ which means that it’s seen through a perspective of criminality and perversion and heterosexuality. But it’s remarkable just how much kindness, tolerance and compassion there has been through the centuries in some unexpected quarters.

“Gay history is not all about prejudice and hatred, and I think Stella and Fanny’s stories show both sides.”

Wilde’s muse made an Edinburgh life 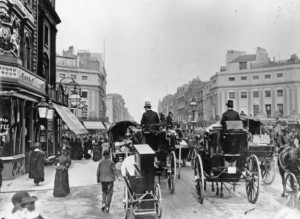 THE previous book by author Neil McKenna delved into the life of Oscar Wilde – and again threw up an Edinburgh connection.

In The Secret Life of Oscar Wilde, McKenna claimed that the Victorian author’s novel The Picture of Dorian Gray was about a relationship between Wilde and John Gray, who was when they met working as a librarian at the Foreign Office but also writing poetry.

It is alleged the pair had an intense relationship, but by 1893 it was over and Gray had taken up with a wealthy Russian-born Jewish connoisseur, Marc-André Raffalovich.

However Gray, who had converted to Catholicism in 1890 after growing up a Methodist, is believed to have become more devout when Wilde was put on trial for gross indecency – and he also employed a lawyer to ensure his name was not dragged into the court case.

His increasing religious devotion saw Gray enter the Scots College, Rome, when he was 32, to study for the priesthood. He was ordained in 1901 and became a priest in Edinburgh, first at Saint Patrick’s in the Cowgate, and then as rector at Saint Peter’s in Morningside.

His partner, Raffalovich, also became a Catholic and settled in Edinburgh in Whitehouse Terrace, his house becoming an artisitc and intellectual salon. He also helped finance St Peter’s Church where Gray served as priest for the rest of his life.