Nikita got an even bigger shock in store when the man she was planning to marry told her he in fact was a lesbian trapped in in a man’s body.
The biggest bombshell, though, was Nikita discovered her lover, Shawn Michel, looked exactly like she did when he was fully dressed as a woman.
When Shawn was wearing the same dress, red lipstick and lace tights, Nikita’s boyfriend looked identical to to her twin sister.
It was very hard for Nikita, 20, who couldn’t handle the idea of sex her lookalike fiance.

Shaun’s crossdressing has long been out in the open and he declares that he still looks his ex when he dresses as a woman.
Nikita declares that when Shaun first told Nikita he was a crossdresser she wanted to fully support him since she admits she has always been open-minded, but when she saw him all dressed up in girls clothes, it was like she was looking in the mirror. 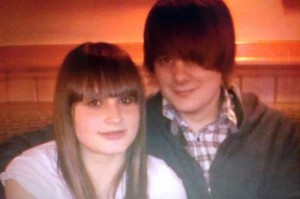 It would have been like going to bed with myself says Nikita. “My boyfriend had turned into my twin sister. I wanted a lover, not a twin sister, and couldn’t help falling for his mate.”
The pair met in 2011 and had been together for eight months when Nikita first suspected the supermarket worker was hiding something from her.
“We were so happy and so close and suddenly he became very quiet and withdrawn.”
Nikita feared there was another woman involved. She says: “I didn’t want to believe it but I couldn’t think of any other reason for Shawn to be so distant, even though he denied it.”
But Shaun wasn’t being entirely honest because there was in fact another woman,  just not in the way Nikita expected.
Nikita says: “One night I begged him to tell me the truth and he wanted to, only he didn’t seem capable of finding the words to express himself. Nikita decided to hand Shawn a pen and paper.” 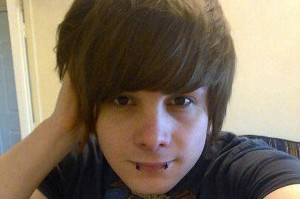 Shawn, 22, began to write and when Nikita glanced at the notepad she was shocked. Her boyfriend had written: “I wish I was a girl.”
She says: “At first I was relieved that its wasn’t another woman, at the same time thinking he was joking
“But he was covering his face with his hands and it hit me that he wasn’t joking, he was for real.
The man I wanted to marry was telling me he wanted to be a woman. I couldn’t believe it. There was another woman, but it was Shawn.”
Shawn admitted to Nikita that he wanted to dress in women’s clothes and dreaded he had been born in the wrong body. Nikita says: “I was trembling when I asked him if he still loved me. He insisted he did and I said I loved him too.”
But as the news sank in, Nikita began to have reservations. She says: “The initial relief that there wasn’t another woman faded and I soon began having second thoughts about how our relationship could work in the long run.”
Shawn pleaded with Nikita to give their relationship another chance but she wanted to know if Shawn was gay.
Astonishingly, Shaun explained that, as he still loved Nikita and that he considered himself a lesbian trapped in a man’s body.
Nikita says: “It was all getting more and more confusing every time, but I couldn’t ignore my feelings for him.
Nikita always considered herself straight and now she faced having to was marry a lesbian trapped in the wrong body. It was all very hard to accept.”
With the secret out in the open, Shawn returned to his usual happy self but Nikita struggled to accept her lover’s secret.
Nikita says: “I convinced myself I could live with it because I didn’t want to lose Shawn. So I offered to help him buy make-up and clothing and he was very ecstatic.”
But then at a party a few weeks later, Shawn put on lipstick and eyeliner, terrifying Nikita.
She says: “When he put make-up on I felt on edge, terrified people would notice.” But she wanted to try and accept her man’s crossdressing ways.
Nikita says: “I cleared a drawer at my place for him to keep his women’s clothes in. I also browsed online for wigs with him and let him get them delivered to my house because he still lived at home with his parents.
“It was kind of funny, because I always wanted a sister to go shopping with and buy make-up and stuff with and now I was doing it with my boyfriend.”
Months after telling her his secret, Shawn asked Nikita if she felt comfortable seeing him fully dressed in woman’s clothes?
She says: “I told him I was ok with it and I was ready.
He didn’t have anything to wear, so I let him go through my wardrobe and pick out leggings, denim shorts and a strappy top.
“It was exactly the kind of outfit I would have gone for.” says Nikita.
Next Shawn asked to borrow Nikita’s make-up and she helped him apply mascara and lipstick.
Finally, he put on his new wig and as they stood side by side in front of the mirror Nikita gasped in shock. Her man now looked so much like her it was hard to tell them apart in the mirror.
She says: “It was like looking at my twin sister. My head was spinning, it was so crazy.
“The wig he’d bought had the same blunt fringe and choppy layers as I had. I was totally stunned.”
But Shawn was so excited and wanted them to step out in public together. Nikita says: “I agreed, because it was what he wanted, but I was terrified someone would see us. When he went to kiss me, I freaked out.

“It was like I was kissing myself. It was just so weird.”

“In that moment I couldn’t feel the same for him.”
Nikita wondered if she just needed more time to get her head around her man’s crossdressing.

She says: “When Shawn told me mentioned that he had also told his best friend, Matt Heal, I felt relieved that someone else knew.”
Nikita and Matt started messaging each other, discussing ways they could help and support Shawn.
When Matt, 22, told her it was ok to call him if she ever needed to talk, Nikita found herself calling him.
She says: “I’d kept this crazy secret to myself and I just needed to get it off my chest.”
Nikita soon began to realize she looked forward to her chats with Matt.

She says: “With Shawn our lives had become about him dressing up.

“All we talked about was clothes, hair and make-up. We had the same conversations I had with my girlfriends, and I began to accept that it was never going to work.”
A few weeks later she finally found the courage to break off their relationship off with Shawn.
She says: “I told him we could be friends, but I just couldn’t be his girlfriend anymore.”
Shawn begged her to change her mind but Nikita already had feelings for their friend Matt. When Matt had invited her to a pal’s party they ended up making out.
She says: “We both knew we had to find a way to tell Shawn about us but he found out from someone else before we had the chance to tell him.”
A few days later Shawn threw a bag of clothes he had borrowed from Nikita over her garden fence. Nikita says: “I was devastated to think I’d hurt him so much, and I was also mourning the loss of the man I thought I would marry one day. 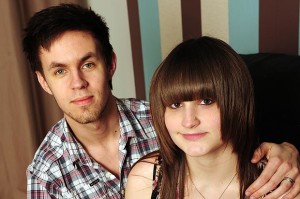 “I just couldn’t accept him as a woman, especially not a woman that looked like me.”
Nikita and Matt moved in together and he proposed in February last year.
She says: “I felt sorry for Shawn and I heard he was still very angry with us, but at the end of the day he just wasn’t the man I fell for.

“I know Shawn is finally in the open about his crossdressing and I’m happy he’s found the courage to be himself.”

Shawn says: “Nikita was the first person I told about wanting to dress up as a woman.

When I first told her, I felt I wanted to go for the whole shebang, living full-time as a woman, start hormone therapy, the complete works.
“But I know now I am happy being a guy and crossdressing. My friends still say now that I look like Nikita when I am dressed as a woman.
“I did have a fight with Matt for obvious reasons but I don’t feel angry any more. I’m happy and I hope Nikita and Matt are too.
“I’ve now have a new girlfriend and she knows everything about my past and my crossdressing. She totally accepts me for who I am.”