Here I cover some of the common frequently asked questions related to crossdressers and the act of crossdressing.

Anyone seeking a deeper understanding about crossdressers should read this post. Feel free to contact me if you feel I left something out. Your feedback is appreciated and welcome.

Q) What is a crossdresser?

A) Crossdressers also known as transvestites are in most cases a male that desires to dress in female clothing. Much speculation has centered on why some men crossdress. No one knows for sure. While some cite hormonal or genetic factors, others favor environmental factors. No one can possibly describe all types of crossdressers in a few short sentences. 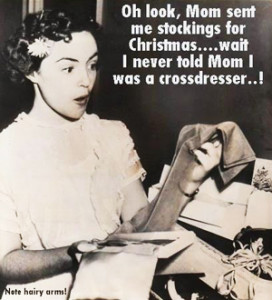 Most crossdressers purge their cloths when threatened or discovered, but almost always end up getting them back after a while.

Some dress fully complete with name and female persona and others, fetishists use it as a means of sexual satisfaction. Fetishists usually express themselves with female undergarments and don’t always dress fully.

You would be amazed how many successful men are closet crossdressers. Coming out is very hard to do in our society, because of all the common misconceptions the public has regarding men expressing their feminine side.

There are perhaps several million in the United States, for it is estimated that they comprise 5% of the adult male population.

Q) Why do men crossdress?

A) There are those who dress for erotic reasons, those that like the feel of female clothing, and those who wish to go out dressed as a woman just like one of the girls. In almost all cases they are not usually gay and do not desire men as partners. They are regular men when they are not dressing up and they not desire to be a woman full time. Dressing up is purely an expression of their feminine sides. Most of them are ordinary men who have discovered a feminine aspect to their personalities, and desire to transcend the narrow stereotypes mandated by conventional society.

Q) Is wearing women’s clothes considered to be an illness?

A) In most cases no treatment is necessary as crossdressing not considered an illness. If the cross dressing is out of control and becomes compulsive, then, anti-compulsion drugs are sometimes prescribed.

Q) What Types of People Crosdress?

A) Crossdressers come from all walks of life, races, creeds, and economic backgrounds. The phenomenon dates back many thousands of years. In some cultures, especially some Native American tribes, they were highly respected as shamans. Most crossdressers are well educated and come from conventional family backgrounds. The vast majority is heterosexual and most are, or have been, married. Most are happy in their masculinity, and only a small percentage opts to live as women full time. A few women are crossdressers, but they are much less frequent than males. No doubt this is due to the freedom our society grants to women in matters of dressing and self-expression.

Q) Are crossdresers considered to be gay?

A) No, cross-dressing men are usually not gay and most are married or in a heterosexual relationship. Less than 10% of crossdressers consider themselves bisexual, or homosexual. The stereotype that crossdressers are gay comes from the false assumption that femininity exists to serve masculinity. One has to first assume that the reason women wear dresses, makeup, or heels is to gather the attention of men, within this sociological sexist framework, poeple can then repeatedly assume that any man who dresses as a woman is also doing it to gain the attention of other men. Of course this isn’t the truth at all.

It’s true that on occasion women do dress up to impress a man, but the vast majority of the time women dress to look nice for themselves, to feel better about themselves, or to impress each other. Crossdressers are much the same; they dress up because it feels good to them, not necessarily to attract the attention of other men.

Q) Is crossdressing usually enough grounds for a couple divorcing?

A) Crossdressing is rarely a cause for divorce as compromise is usually only a matter of granting time for the activity. In most cases crossdressers stay married. Most differences can be worked out to the satisfaction of the couple.

Q) My husband is a crossdresser.  Should I be worried that he might want to ‘go all the way’ and become a woman one day?

A) Generally speaking, no. A large majority of crossdresers do not identify themselves as transsexual, or identifying with being born into the wrong body. For the majority of crossdressers, their feminine feelings and expressions are limited to clothing, fashion, makeup, wigs.  Unfortunately the society we live in commends very limited roles for both males and females, but when it comes to dress codes, males are much more limited. Some guys grow up resenting this, much the same way that some girls grow up resenting wearing dresses and choose to never wear them. A lot of times guys, just like many women,  get exhausted by their prescribed role in society and just want to find some kind of “balance” by expressing something different than masculinity.

Q) Why aren’t there any “female” crossdressers?

A) They are everywhere! Simply walk down the street any given day and you’re sure to see a woman that is wearing nearly complete male clothing. There are women that literally despise wearing dresses, and feel much more comfortable heading to the men’s section of the store to find clothes that feel right for them. The simple difference is that society deems it acceptable for such women to exist and express themselves out in public this way, whereas no such accommodation exists for men. This is one of modern society’s biggest double standards.

Q) Do crossdressers take female hormones and want to change their sex?

A) In almost all cases no. In very few instances do crossdressing men progress to a sex change unless they are latent Transsexuals.

Q) When do men usually start dressing up?

A) Crossdressers usually start dressing up as a child or in their teens. In very few cases it can start later on in life.

Q) Why do they start dressing up at a young age?

A) Probably out of a sense of childlike curiosity. With some, their sisters or a baby sitter may have dressed them up as girls either for fun or punishment. With some it is purely a fantasy. Dressing can relieve the stress involved in living up to the perceived male role model as a tough, problem solver. Pretending to be a girl may provide him with a release from male peer pressures. Many times crossdressers will start dressing up in lingerie or silky clothing, like pantyhose or stockings purely for the feeling of the fabrics on their body.
Crossdressing in many cases, will progress as time goes by to include complete dressing up, applying makeup and wigs, even mimicking female walking and talking.

Q) Why did his dressing come back after a long time?

A) In the mid-twenties and later social and economic pressures start to surface. Children, a mortgage, car payments, and education worries can play a role. Undoubtedly the biggest factor though is his job. Career matters at work intensify as peers are promoted even including him. Pressures of family life and losing the newness of a relationship all can contribute to his crossdressing. As the stress builds up, the deep memories of his crossdressing resurfaces as it relieved stress and the daily pressures in the past.

Q) What is purging?

A) Crossdressing often times slows down as one grows into their twenties. Diminishing to partial dressing or stopping completely in what is called Purging. New loves and relationships make dressing quickly fade into the background and stop completely making the CD even think they are cured.

Q) Can one make a crossdresser stop?

A) This is probably the worst thing anyone can do. Forcing them to stop and purging their feminine side could have disastrous consequences. Most likely he would binge later on as the crossdressing urge would be even stronger. Besides the pressure will still be there and could lead to violent break outs or emotional distress. There is no “cure” for 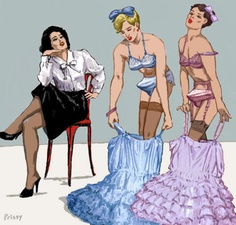 crossdressing, and most crossdressers do not want one!

Because of possible consequences to families, jobs, and friends, many crossdresers live shrouded in secrecy. Burdened by fear and guilt, some crossdressers deny their feminine side and dispose of their clothing. Usually they are frustrated by this elimination of a significant part of their personalities, and eventually return to feminine self-expression. Some seek therapy, but as many therapists are not knowledgeable about crossgender issues, they sometimes find themselves educating the therapist rather than getting the help they seek. Nor are psychiatric drugs of benefit.

Q) Is there sex involved in crossdressing?

A) Yes! In the beginning especially as a teenager experimenting with self-gratification. The crossdressing often adds to heighten the sexual feelings in young CD. Usually the sexual desires will be less as a crossdresser grows older to completely being nonexistent by middle age.

Q) What can you do if your partner is a CD?

A) Compromise is the key for both parties. After all you are hurt and probably shocked after finding out. This is a lot to absorb in a short time and try to realize that neither of you is to blame.
He is terrified now of losing you or that you’ll tell someone.

Reassure him that you love him and that you are going to need to give him some time to allow him crossdress behind closed doors. Remember, it is a stress reliever for him. If you don’t want him to touch your apparel, just tell him. He needs to respect your wishes but you should assist him in get his own clothing and such. Catalogs work great or online shopping if you don’t want to shop with him.

He can also join a crossdressers club in your area where he can dress freely. There are also support groups where you can talk to other wives experiencing your same situation.

Sometimes you will come across a bitter group. You are in the wrong place. You need understanding, not condemnation.

Q) What do you gain if you let him crossdress?

A) You both have much to gain. After so many years in the closet he is finally free to be himself and feel accepted by the one he loves. Benefits are less stress, happier person, better health, thoughtfulness and appreciation.

Q) You’ve let him be himself but now all he wants to do is Crossdress. Now what do you do?

A) Often crossdresers are compulsive by nature. Finally feeling free to dress up, newly accepted crossdressers often become like kids in a candy store. You may have to jolt him back to reality. You just state that you miss the man you love and married. Tell him you’d like to see that man a little more often. If he has trouble, he may see a psychiatrist about his compulsive behavior.

Q) I feel so alone, like there’s nobody to talk to about this. Where can I get help?

A) There are so many resources available to you. Check out our crossdresser resources pages for great books and other sites that explore this topic. You can also seek out a gender therapist who specializes in dealing with gender identity issues. At a minimum, you should try and be open and honest about your feelings with your partner and ask the same in return. Try and keep an open mind, and realize that while women may not be treated equally or fairly in terms of employment, or numerous other things, that men are not treated equally or fairly when it comes to gender expression, among other things. Your relationship with each other can grow much stronger. Your understanding of humanity and society will grow much deeper through this. However you really need to have open lines of communication, and mutual respect.

CD How To Education