Crossdressing and ADHD. Is There a Connection?

Can most crossdressers be affected by ADHD?

This articles sheds some light on the possible link between crossdressers and ADHD.

Crossdressing is often described as an obsession which amounts to one’s inability to detach attention from some object of focus, so there is a connection. The question no one seems to be able to answer about crossdressing is why focus is drawn so strongly to the feminine role. Likewise no one seems to know what the source of attention disorders is.
“Is there a connection between crossdressing and ADHD, also known as “Attention Deficit Hyperactivity Disorder?”

Several people I know have noticed this connection. I have not seen research that confirms it absolutely but I believe there must be a relationship between them.

I believe that some young males are traumatized early on by being ostracized from feminine intimacy. As with other species, human males are expected to be strong, independent, detached, resourceful, objective, etc. It’s hard and scary to try to live up to these expectations. To some boys, girls “have it easy”.

I believe that being pushed to “be a man” causes some boys to both narrow their focus to the feminine intimacy they have lost and to lose some ability to focus on the rest of their experience. Thus the same crisis might cause both crossdressing urges and attention problems. This seems reasonable to me. 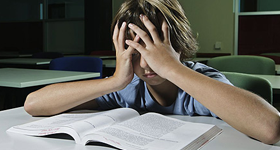 ADD and ADHD can lead one to a negative mode of focus and attention, which, as Winifred Gallagher in her new book _RAPT_ explains, causes one’s width of focus to narrow dramatically. Do something that cheers you up and your mood become more positive? Crossdressing can be such a mood enhancer as it literally pulls you out of yourself and makes you refocus on a wider area of how you look and how you behave. For some people I think crossdressing can be an antidote for depression. If CD and ADD have the same cause this antidote is all the more effective.

Lately I am beginning to think that crossdressing must produce some kind of neurochemical high, perhaps due to adrenalin and endorphins, which may give a temporary escape from attention problems as well.

Symptoms and Signs of ADHD

Although ADHD begins in childhood, sometimes it’s not diagnosed until a person is a teen — and occasionally not even until someone reaches adulthood.

Because ADHD is a broad category covering different things — attention, activity, and impulsivity — it can show up in different ways in different people. Some of the signs of ADHD are when someone:

Doctors and researchers still aren’t exactly sure why some people have ADHD. Research shows that ADHD is probably genetic and that it may be inherited in some cases. Scientists are also exploring other things that may be associated with ADHD: For example, ADHD may be more prevalent in kids who are born prematurely. It is also more commonly diagnosed in guys than it is in girls.

Doctors do know that ADHD is caused by changes in brain chemicals called neurotransmitters. These chemicals help send messages between nerve cells in the brain. The neurotransmitter dopamine for example, stimulates the brain’s attention centers. So a person with low amounts of this chemical may show symptoms of ADHD.

I hope this article has helped you better understand and perhaps relate to this silent and hidden problem many of us suffer from.

Feel free to post a comment below and let everyone know how you feel about this article and if it helped you in any way.